Turning a Problem Into a Revenue Stream

All of the best entrepreneurs have one thing in common - they solve a real problem that their customers are experiencing. When Jesse and Amanda embarked on the journey of opening Central Athlete, they did so because they saw a gap in how the fitness industry delivered services that actually set people up for success in a sustainable manner.

Shortly after beginning to work with clients, Jesse ran into another issue when he was developing individual programs - exercise demo videos on YouTube mostly suck. If you’ve ever had to look up a demo video for a movement for yourself or to send to a patient or client, you know what we mean. You get about five minutes of a shirtless guy in a globogym talking about his brand or his supplements, and then another minute of explanation about the movement, often with interruptions about unrelated topics.

This was not in line with the quality of service that Central Athlete wanted to offer clients, so being the entrepreneur that he is, Jesse solved the problem by recording his own videos (though he was still shirtless in many.) Central Athlete’s demo videos are each less than a minute, without talking, and clearly show 3-5 reps of the movement. As he continued to develop personalized fitness prescriptions for clients, another problem came up; delivering those programs and getting results back from a client using a Google spreadsheet wasn’t efficient. As Jesse began to work on a platform to solve this problem, he learned of TrueCoach, then FitBot, which was about 6 months ahead in development. Instead of competing, they worked together to put Central Athlete’s exercise video library into TrueCoach’s platform for all of their coaches to use.

It’s been over 5 years now and the video library has been a lot of work. For most of that time, TrueCoach was the only business that chose to partner with Central Athlete. Now, Central Athlete has a small team responsible for filming, editing, and uploading all of the videos to YouTube. Recording regularly for years created a database of nearly 2,000 movements ranging from typical air squats and push-ups, to complicated single-arm gymnastics movements. In working with TrueCoach, that database grew to include not only movement names and videos, but categorizations to help filter what muscles are used, what the movement pattern is, and more.

About two years ago, Central Athlete started receiving interest from other platforms in utilizing our exercise video library. While TrueCoach is our primary partner, they allow us to license the library to other companies and individuals who aren’t direct competitors. What began as a small solution to our own problem has now grown into a viable revenue stream that services tens of thousands of individuals all over the world, from the U.S. to Greece to New Zealand.

The two biggest lessons that come out of this for other business owners are simple:

1) solve a real problem that people have

In scratching our own itch first, Central Athlete helped itself and while doing so, built a service that now supports our own business growth as well as that of other fitness professionals.

If you’re a business that prescribes movements to clients in any manner and would find the exercise video library valuable, feel free to reach out here. The 2,000 movement database is also available for coaches, trainers, and PTs on an individual level through an app that can help keep your programming creative and fresh. Get in touch to learn more! 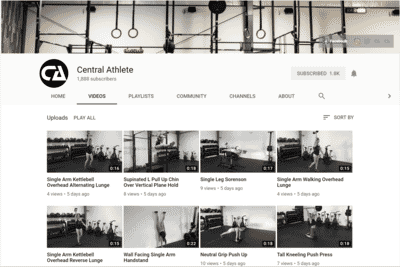