Is Your Warmup Too Long?

The warmup is always a hot topic of debate (pun intended). Due to its popularity as a critical precursor to each workout, let’s review some of the basics of the warmup.

When the body temperature increases to 99.5º, the following occurs:

These physiological changes of increased core temperature lead to improvement in performance during your bouts of exercise or training. Increasing your core temperature is always the priority for the warmup.

Understanding the above principle might help you reshape your definition of the warmup. It is utilized to increase core temperature, while other specific drills prior to your main bout of exercise might be considered something else.

The individual’s program should not involve exercises that require 15-20 minutes of specific mobility preparation. If this is the case, that individual is likely not ready to perform that movement. Let’s take the snatch, for example. If the athlete needs to spend 20 minutes loosening up the shoulders and hips before they can comfortably perform the overhead squat, they likely need to reprioritize their training. Instead of warming up for 20 minutes and then performing the snatch, it is more ideal to spend two to three months of your training with specific workout time devoted to those mobility deficits and achieving the overhead squat position. We need to reshape the idea of the warmup. Warming up equals increasing body temperature; everything else is considered training or exercise. Here is an example of a warmup to understand this distinction:

Mike is a 35-year-old that participates in a general fitness program with a strength training bias. Mike is performing back squats today and is hoping to achieve a new five-rep max personal record. Mike arrives at the gym and immediately rides the bike for eight minutes at a moderate intensity. He starts sweating and breathing a little bit heavier at around six minutes and continues until eight minutes to assure his core temperature has increased sufficiently. Following this “warmup,” Mike begins his squat movement preparation work. Mike has been focusing on improving the rotation in his hip during deep hip flexion, along with cueing himself to track his knees over his toes on the descent of the squat. Mike performs one round of 10 Captain Morgans/side and 10 Kang squats (emphasizing knee position in relation to toes). This movement preparation portion of Mike’s training is just as important as the squats themselves, so he continually progresses these exercises and puts focus into this portion of training. Following his movement preparation, Mike begins to squat and works up to a new five-rep max personal record.

Not everyone will need to put time into movement preparation training, but Mike focuses on this because he has deficits in mobility and his squat pattern. Mike chooses to put this before his squats because he realizes improving these aspects of his fitness (mobility and technique) are even more important than how much weight he lifts. The important distinction is Mike’s mentality around the movement preparation. Mike could have come into the gym and performed the Captain Morgans and Kang squats right away, but he would not have been able to receive the optimal benefit from these exercises because his body and mind are not sufficiently warm. However, Mike could have done three rounds of Captain Morgans and Kang squats, utilizing the first two rounds to get warm and then utilizing the last round to heavily focus on his deficits. In this variation, Mike increased his core temperature and attentiveness through the first two rounds, so by the time he was in his third set he could really focus on the movement quality and achieving the best position possible. Both of these options are great for Mike, and ultimately it will be determined by Mike’s preference and his coach.

It is common to see athletes foam roll and stretch with no progression in mind, merely going through the motions during their so-called “warmup.” Clients are often concerned with keeping their workouts under an hour. In order to get the most out of that hour, there is no time for going through the motions. The exact warmup needed will be highly individualized, but what is important to take away from this article is the idea that the warmup should be utilized to increase core temperature; everything else is training. If you only have an hour, spend five minutes increasing the core temperature and spend 55 minutes training.

Here are some examples of modifications made to warmups and programs to be more time-efficient.

*The split squat (while still utilized as an accessory movement) also acts as a primer for the squatting pattern. The client focuses on unilateral leg strength, and at the same time is able to prime the body for the back squat.

*In this variation, the conditioning is utilized as the warmup. This requires nothing prior because the first round is at a lower intensity and the movements required are lower intensity.

These are just a few examples of ways to modify your program towards increased efficiency in your warmup. If you feel you are going through the motions at the beginning of your training session, speak with your trainer or a professional Central Athlete coach about becoming more efficient with your program. Schedule a strategy session here. 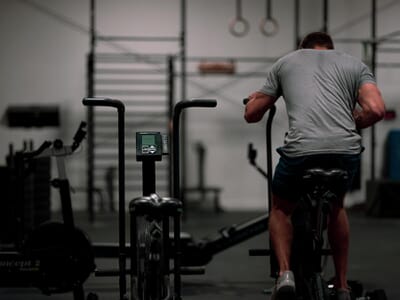