How Personalized Fitness Saved my Life

My name is Mariana, and I was born and raised in Mexico City. Health and fitness have always been a big part of my life. Growing up, I remember going every summer to a sports camp, and during the school year I would take tae kwon do, swimming lessons or gymnastics classes. It was a place where I felt I could express and be myself, no matter what. Fast forward to high school: I began to find ways that seemed “healthy” to improve my body composition and before I knew it, I was clinically diagnosed with anorexia and body dysmorphic disorder. This is where my story began.

In Mexico, mental health is still a taboo. We have no education nor talk about it whatsoever. Thus visiting a psychiatrist and getting medication in high school was a huge no-no, but I told myself I would figure it out. That was when I found CrossFit. At the beginning I saw its capability to help me lose weight, look good and be healthy. Slowly, I started falling in love with the sport. Every day was a challenge in some way and that made me push myself even more. Later it became my number one priority. Most of you may think that’s good, but as with every happy story, there was a downside.

I came to Austin in 2018 to pursue my degree in Kinesiology and joined a local CrossFit gym. The more I immersed myself in the sport, the fire in me grew. Thus I decided I wanted to become a competitive athlete. Yet before I realized it, I was working out more than four hours a day, five days a week, and eating nothing but what was on my meal plan. My training program was a generic “one size fits all” for over two-and-a-half years. I did not have my own coach, so that meant no individualized training, progressions, or guidance. I taught myself with YouTube videos how to do certain movements. What started as a healthy habit reached a point of obsession with health and fitness, threatening to derail my life and health.

Eventually my entire life was consumed with training. What had begun as a commitment to health and fitness had become unhealthy and unsustainable, to the point that everything revolved around those training hours and habits, including my class schedule, work, meals and even my social life, which was nonexistent. My relationship with myself and with food were becoming dangerous. For months, this obsession led me to force myself to train or compete with injuries or even when I was depressed. I thought it was just a phase of life that I could get through with more training and discipline - until I wasn’t able to pull myself out of that depressive and self-destructive hole.

I began to hate working out. It started feeling like an obligation instead of something that I wanted to do. In two-and-a-half years I had never missed a workout, but soon it became something that I could easily talk myself out of doing. After years of restrictive diets, I began binge eating, re-triggering my eating disorders. I pushed everyone close to me away and crawled deeper down the black hole. My eating disorders took control of everything in my life again. The adverse relationship with food that I had developed because of restrictive and unyielding diets put me on the other side of the balance of health and wellbeing. I was self-sabotaging, hurting and hating myself but couldn’t see a way to stop. I felt I had no control over anything, not my body nor my brain. I wanted to find a healthy balance again, but my brain had set this idea of how I looked and had stigmatized certain foods entirely, so that I could not enjoy eating in any circumstances nor feel happy in my own skin. Nevertheless I was binge eating everything and then regretting it five minutes later.

I hated fitness, food, and everything related to it until I realized that having chosen a career in fitness, the challenge was to begin a healthier relationship with all aspects of it. A year ago I realized that I needed to find someone who could support and guide me into a balanced life where I could put my own wellbeing first, and fitness would just be a part of my life rather than all of it. That’s when I met and hired Allison McKayla, an Open coach who understood the importance of fitness in my life; however she also realized that it could either be beneficial or self-destructive. After long conversations with her, I started realizing that I had never prioritized the small things such as taking walks, sun exposure, sleeping habits, etc.

The hardest part has been food. Moving beyond eating with a meal plan that outlined exactly what I had to eat made me feel lost. We are slowly working on reintroducing certain foods in my life. I remember the night when I had a big bowl of Fruity Pebbles (with marshmallows) and milk for the first time in almost four years and did not regret it. It tasted like glory! I can finally say that I am learning to like eating without going to one extreme or the other.

Slowly, I began regaining control of small things. I was working out for one-and-a-half hours and leaving the gym with the satisfaction of doing just what my body needed. I did not feel the pressure of having to lift a certain weight or achieve a skill; rather I began simply enjoying what I was doing at that moment. Spending that much less time at the gym gave me a lot of spare hours that forced my introverted self to reach out to friends. I even got to find a new hobby, which still includes working out, but going to the lake and paddling helps me reconnect with myself and breathe.

After being alone for so long I developed social anxiety, but I decided to go back to Central Athlete. It just felt right. It is my home away from home. My closest friends are part of this community, and they are part of my support system. They have pushed me to go back to my old self, the one that is extroverted, laughs at absolutely everything, loves to help people, and enjoys being around them.

Looking back I can finally say that I understand what Jesse and Amanda O’Brien told me throughout those years and what they were trying to warn me about. Switching to a personalized program saved my life and continues to help me develop as a person, friend and professional. I learned that fitness is a small piece of life. Combined with relationships (to self and others), nutrition, sleeping habits, and stress management, it truly can improve your quality of life. 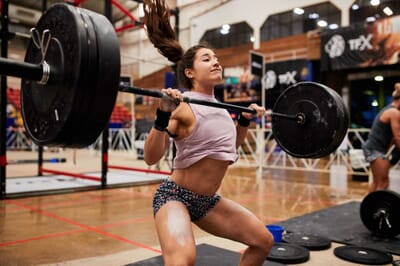