Gaining Perspective from a Career Transition

I left police work to make a bigger impact. That in and of itself is an incredibly bold statement, one that may elicit a strong reaction from many camps. Let me explain before you draw any conclusions. I became a full-time police officer in 2009 at the age of 21. When asked why I wanted to become an officer during my interviews with several departments, I gave the same response as most who have sat in that chair: “I want to help people.”

I believe this answer was unequivocally truthful for the majority of people sitting opposite that panel of interviewers. I know it because I witnessed it. The things that police officers accomplish under the umbrella of “helping people” are rarely, if ever, publicized, and that is a shame. I could share dozens of stories of other officers who literally brought people back from cardiac arrest, rescued victims from traumatic domestic violence, or talked someone down from committing suicide. Almost every officer I know is a tremendous person and is making an impact. Still, in 2017 I decided to leave full-time police work.

The reality of what that process of helping people looks and feels like is impossible to know sitting in that interview chair. Every candidate thinks they know and understand, but they have no clue. This may sound incredibly selfish, but it is very rare to see the fruits of your labor in “helping.” You seldom get to see the full resolution or what the impact of your actions did for them.

Around 2014, another officer and I were sent to a residence for someone who had stopped breathing and was without a pulse. Surrounded by a hysterical family, we found the person clinically dead. Through resuscitative efforts, and with an AED, we were able to restart his heart. By the time he was put in the ambulance, he was talking again with his wife. Despite an immediate feeling of elation and awards that were later presented, I still don’t know what impact my colleague and I made. I don’t remember this man’s name. I don’t know what his life looked like afterward, and I don’t know if he is still alive today. In many of these situations, a feeling of satisfaction and closure in helping is extremely fleeting, if present at all. The next event is looming, and you do it all over again. The answer I gave in that interview chair was true; what I didn’t know was if police work would ultimately satisfy that initial desire to be of service to others.

I began coaching in 2012, and for many reasons, I felt it was the best thing for myself and my family to leave full-time police work to assist people in their health and fitness. While I still work as a part-time officer, I am fully committed to making an impact in a much different way, and I find it far more rewarding.

Three years ago I transitioned to working with people through individual coaching. I now have the opportunity to get to know people on a very personal level, which I am grateful for and find extremely rewarding. In this process, much trust has to be earned on my behalf. To get to the root of someone's problems, I need to know and see some of the hardest parts of their lives. I get to develop trust to a level where they feel comfortable sharing their stories and the hardships they have faced concerning their health and relationships. I have worked with people who have seen incredible improvements in their mental health as they built more confidence in their relationship with their body, food, and health. Some have been able to get off of blood pressure medication, function in their daily lives without pain, and wear a bathing suit for the first time with confidence and without shame.

Not long ago I had the opportunity to work with someone who had “tried everything” to improve her back pain after unsuccessful surgery. The result of surgery left her in more pain than before, was affecting her relationship with her boyfriend, and left her in a “no way out” feeling of darkness. I remember my initial consultation with this person. She was literally in tears describing her life, and the fact that her boyfriend putting his hand on her leg was enough to cause her pain. Working as her coach and eventually seeing her able to participate in things she once enjoyed was an incomparable experience. While our work together is complete, I experienced great fulfillment in seeing her progress from the person I saw in my office to sending me messages about her rock climbing and kayaking one year later.

I found that a large part of my satisfaction with what I do is seeing the whole story play out. This is the biggest gap I experienced working in the police world. It’s quite amazing to be in a position where I see the resolution and the positive impact on the people I work with daily. I get to see them living life more fully; I get to see the improved relationships they have with their family and with themselves.

It is likely an unwinnable debate as to who and which profession makes a larger impact on someone's life, and it’s a debate I am not trying to make. I am surely not saying that the work I did as a police officer was any less important than what I do now. For me, it is just different. It’s different in how I process it, and in the satisfaction that I feel day in and day out.

If you want to work with someone who is passionate about health, wellness, and fitness, schedule a free strategy session with a Central Athlete coach below. 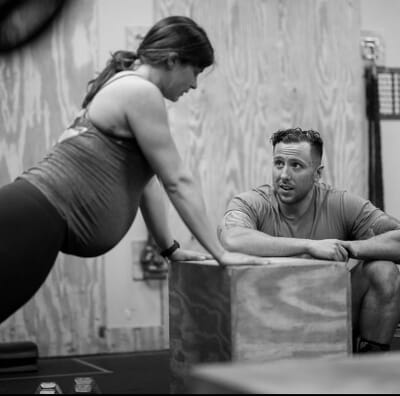