Everything You've Been Told About Your Metabolism Is a Lie

Most people have been conditioned to believe many false truths about health, fitness, and aging. These false truths come from agendas like monetizing health, science that has since been debunked and generational tales such as 'low fat is healthy' and 'lifting weights make you bulky.’ Regardless of where it comes from, people walk around every day carrying beliefs that make them feel helpless or out of control when it comes to their health. Sometimes it can be easier to believe the forces of nature are to blame rather than one's own ability or lifestyle.

One aspect of health that many take comfort in believing is the metabolism myth. It has become so popular that many health and fitness professionals still believe that metabolism is the culprit for their client’s weight gain issues. It sounds almost too good not to argue and has since become one of the more common excuses for weight gain over the years. We’ve all either heard or experienced this cycle; the phenomenon of post-high school weight gain, and the difficult road and perpetual cycle of trying to take it off. Fortunately, blaming metabolism is a bunch of crap, and people have way more control over their ability to lose weight than they think. To some that may be great news but to others, there may be some fear and anxiety knowing there most likely isn’t something to blame other than their own lifestyle and behaviors.

The truth is, new studies have shown the metabolism's degradation as one ages to be fairly negligible. The time of one's life when they experience the greatest degradation in their metabolism is outside of the window when most blame their slowing clock. Let’s break down the study completed by Herman Pontzer and other scientists who collected data from nearly 6,500 people, ranging in age from 8 days to 95 years to better understand what happens to metabolism when we age.(1)

From birth to age 1, metabolism rages its hardest, climbing to about 50% higher than at any point during adulthood.

From 1 to 20 years old we see the most gradual slowing of the clock to the tune of about 3% per year.

Here is where it gets surprising… from age 20 to 60; nothing happens! Your metabolism sustains.

After 60 your metabolism slows to less than a percent a year. (2)

Your metabolism is mostly made up of the function of your organs. This is the reason it levels off from age 20-60. Assuming that organs are functioning normally, which they should be from age 20-60, it would make sense that there isn’t a drop-off here. The quality of organ function is the biggest reason why the precipitous drop-off begins in the twilight of most people’s lives.

If the stages of life that have been culturally accepted to coincide with an increase in body weight and feelings of lethargy are not a natural occurrence within us, then what is to blame? Lifestyle behaviors begin to change on a similar schedule as the stages of life listed above. In high school most people are extremely active. The natural progression for many is to transition to the workforce or college where they become far more sedentary. Throughout the next 40+ years, there seems to be a habitual degradation of activity level in most individuals as well as an increase in more convenient calorically dense food choices. Therefore fewer calories are burned, not through the natural internal fire of your metabolism quelching but because you begin to sit more than you move. Combined with the excessive calories and poor food quality of the standard American diet, there is little to blame but lifestyle choices. This should be a remarkably positive revelation. Humans can affect change with their body composition and energy, not by turning back the hands of time, but by reverting to a lifestyle of a more youthful person.

The recipe is relatively simple. People need to move their bodies with intention every day and eat nutritiously dense unprocessed food. Simple doesn’t always mean easy, so if you need help discovering how to live with vitality, schedule a FREE strategy session here! 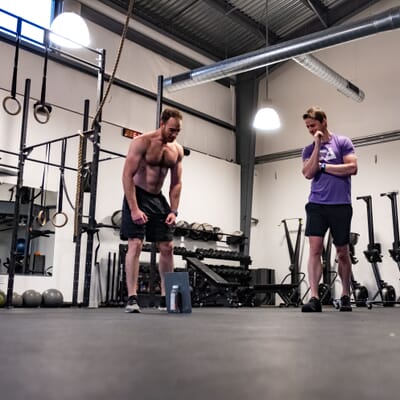