A Systematic Approach to Learning the Snatch

Olympic Weightlifting is undoubtedly one of the most difficult and oldest olympic sports to date. It consists of only two movements: the snatch and the clean and jerk. The former being a movement in which the bar is lifted overhead in one motion, and the latter being lifted overhead in two separate movements. Both require a huge amount of athleticism, strength, technique, and flexibility to lift large amounts of weight.

The snatch is one of the most technical movements that have ever been performed in the world of strength. With the movement being so technical, there are many different ways to teach and progress the lift. At Central Athlete, we utilize the ABC Method devised by the late Justin Thacker from The Lab Gym in St. Louis, Missouri. Justin devised this progression model through years and years of his own training and coaching experience, and has produced numerous National level weightlifters, while also being a National level weightlifter himself. I personally have gone through this model as a coach and as an athlete in my time working at The Lab Gym and find it far superior than any other model to teach the lifts. This bottom-up progression model works in a systematic manner by taking the lifter through multiple stages of progressions to teach the lifter not only how to move in the snatch, but what each position should feel like.

The Squatting Quad Series is essential to teach the lifter proper leg drive required to vertically propel the barbell with the most amount of velocity behind it. The Squatting Quad position has the lifter perform a full depth squat with the barbell resting on the top of the knees. The lifter will then push from the bottom of the squat in order to perform each of the following movements:

In the 3-Part Pause Series, the lifter performs each movement with the most amount of pauses. This is to ensure that the lifter is feeling where their body and the barbell should be at the given positions and feels the balance required to achieve the desired position. The 3-Part Pause Series has the lifter pause at the start of the lift, at the knee, and finally in the power position and will perform the same movements from the Squatting Quad Series.

In the 2-Part Pause Series, the pause at the power position is removed and the lifter will only pause at the starting position and at the knee. By the time this series starts, the lifter will have done a number of reps with pushing the bar into the hips with legs and holding that position, so the pause is removed to get the lifter to push the bar the same way, but now push through and drive the bar up past the hips with full knee and hip extension. The lifter will perform each of the movements from the above list.

In the No Part Pause Series, the lifter finally puts all of the pieces of the complex puzzle together. The only pause here is at the start position, but the lifter has accumulated lots of segmented repetitions of the same movements and is now required to push through all of those positions. By this point in the progression, the lifter should be very dialed into the snatch and be able to replicate all of the desired positions required to optimally perform the snatch.

Give this progression a go by utilizing it as a warmup to any sort of snatch work. If you’re interested in Olympic Weightlifting, or any other form of strength training, schedule a FREE strategy session with a professional coach and take your training to the next level by individualizing your approach to training, nutrition, and lifestyle. 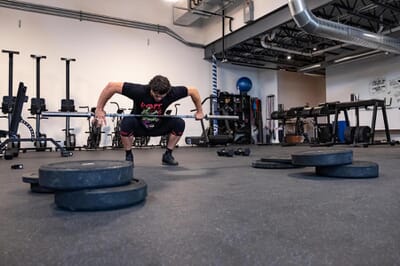