A Systematic Approach to Learning the Jerk

In Olympic weightlifting competitions, the clean and jerk combines two movements to lift the barbell from the ground to overhead. Historically, the clean and jerk can win or lose a competition. In last week's article, I discussed the methods for introducing and learning the clean. Today, I’ll be discussing the biggest “make or break” part of the sport of Olympic weightlifting, the jerk.

In the first two of three parts focused on learning the Olympic lifts, I introduced the snatch and clean utilizing Justin Thacker’s ABC Method. In the third and last portion of our series, we will again employ the ABC Method to systematically progress through the different portions of the jerk. Justin devised this progression model through years of his own training and coaching experience, and has produced numerous national-level weightlifters, including holding the title of national-level weightlifter himself. I personally have gone through this model as a coach and as an athlete in my time working at The Lab Gym and find it far superior to any other model to teach the lifts. This bottom-up progression model works in a systematic manner by taking the lifter through multiple stages of progressions to teach not only how to move in the lift, but also what each position should feel like.

Similar to the snatch and the clean, the jerk also has a “3-Part Pause” Series and a “2-Part Pause” Series. As the jerk is only one movement in and of itself, each series has the lifter pause at different points of the lift to ensure and maintain the correct balance, whether in the dip and drive, or in the catch (split) position.

In the “3-Part Pause” Series, the lifter performs the jerk with three pauses within each rep. The lift starts with a pause in the front-rack position, the bottom of the dip, and in the catch. Again, this ensures that the lifter is balanced at the start of the lift and as he or she lowers into the dip. The pause in the bottom of the dip is crucial for maintaining balance as the lifter is required to rapidly absorb and apply force into the ground to change directions. The pause in the split is performed to ensure that the lifter doesn’t attempt to recover too quickly before the barbell is securely fixed overhead.

In the “2-Part Pause” Series, the pause in the split is now taken away. This series really emphasizes the dip and drive of the jerk. The pause in the split is removed because, in theory, if the lifters are balanced at the start, as they dip, and through the drive upwards, they should be in the most optimal position to push themselves directly under the bar and into a balanced split position. So the pauses remain for the starting front-rack position, and in the bottom of the dip.

Finally, after both series are completed, the lifter now simply performs the jerk as dynamically as intended. By this point in the warm-up, the lifter has taken numerous reps of the jerk while hitting different pauses to ensure optimal positions and balance. The lifter will then simply apply those same positions to the actual jerk.

Give this progression a go by utilizing it as a warm-up to any sort of clean and jerk or specific jerk work. If you’re interested in Olympic weightlifting, or any other form of strength training, schedule a FREE strategy session with a professional coach and take your training to the next level by individualizing your approach to training, nutrition, and lifestyle. 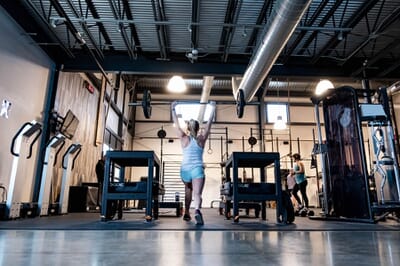