Kasey Reed has been a client here at Central Athlete for over two years now. He came to CA for an individualized approach to his primary goals of lifting more weight in the Olympic lifts: the snatch and the clean and jerk. Olympic weightlifting is one of the hardest sports on the planet. It requires a tremendous amount of strength, athleticism, precision, flexibility, and mental fortitude. Because of these requirements, progress in Olympic weightlifting typically happens at a slow pace, especially as the time of practice continues to increase. It is a sport of contradictions, requiring the athlete to be precise and smooth, while also being fast and aggressive. It is typical to have an athlete make strides in progress, then go through periods of less progress and more frustration; it is simply the nature of the sport.

Kasey first came to me well into this journey, having previously worked with Coach Amanda O’Brien. Kasey had decent technique and adequate strength for his very realistic goal of snatching 135 lbs (62 kg) and clean and jerking 225 lbs (102 kg). It was here that our work began, but it would be a while before we saw any breakthrough.

Kasey has always been an extremely “good” client. He showed up to his training sessions consistently, routinely scheduled consults, had a very good nutritional profile, and was open to many different prescriptions in an effort to identify the best plan to push him towards these numbers. But we were constantly running into the same issues: high volume strength and technique-focused waves were executed to perfection, but we could never tie them into the heavier waves in order to push the numbers of his snatch and clean and jerk higher. Not all is lost, however; he was always able to push his strength numbers through the roof, reaching over 300 pounds in both his squat and deadlift.

It wasn’t until Kasey took one of the biggest steps of his life and took his sobriety into his own hands that this breakthrough finally occurred. And since February of 2021, Kasey has remained sober from alcohol.

"Well before joining CA (and for most of my time at CA), I had a very unhealthy relationship with alcohol. While there were other factors outside of CA that led me to give alcohol up, my desire to get better at weightlifting was a big part of it. As of 5/2/2021 - I've been sober for 89 days and it's astonishing just how much better I feel about everything in my life. My lifts are improving. My mental acuity is up. I'm enjoying things in my life that I had previously forgotten about. It's great!"

As Kasey’s coach, this is the breakthrough that I knew had to happen for him to become successful, and since February, we have not looked back. Kasey is no stranger to the struggles of training this sport. He understands some sessions will come easy, and some sessions just won’t happen, no matter how much effort is expended. But the biggest change I’ve seen is his ability to believe in himself. Mentally, I could see his demeanor change when the weights started accumulating on the barbell. He was nervous, hesitant, and didn’t possess the trust needed to pull himself under a heavy barbell. This is no easy feat in and of itself, but now I see Kasey dial into these heavy lifts and consistently make them week after week.

"My fitness and weightlifting journey has had its ups and downs. Some months I'm killing it in the gym; other months I'm just going through the motions. It's been a tough ride for sure. I've had periods of time where I doubted whether I would ever be able to hit my goals or if I even belonged in the gym. But I kept coming back and putting in the work. I always feel better after leaving training - even if it didn't go completely to plan. If you would've asked me five years ago if I would ever be someone who went to the gym regularly, I wouldn't have believed you. If you'd have said I'd also be a weightlifter lifting 200+ pounds, I'd've called you crazy. It's funny how life changes - and I'm super glad that mine has changed for the better and that I get to keep getting better at weightlifting at CA with Coach Steven and the rest of the gym crew."

This is one of the more powerful transformations that I have ever been a part of as a coach. Kasey and I have worked for over a year to cultivate the best plan for him to succeed. It’s not common to see one habit be the catalyst that propels the client leaps and bounds forward to their goals, but for Kasey, it was. We’ve developed a beautiful relationship over the past year that has culminated in a large amount of care and trust in each other. It is this trust and care in the coach/client relationship that makes this process work so organically.

"Our relationship is awesome - Steven is a fantastic Olympic weightlifting coach and a great friend. We've worked together numerous times to build a training plan and he's been pushing me to break through my mental blocks."

It is only now that Kasey is truly in the driver’s seat of his journey toward success in Olympic weightlifting. He has now fully taken control of his life, in and out of the gym, to align his goals with his values and priorities. Only time will tell just how far he takes himself, but all I know is that I’ll be in the passenger seat with him every step of the way. 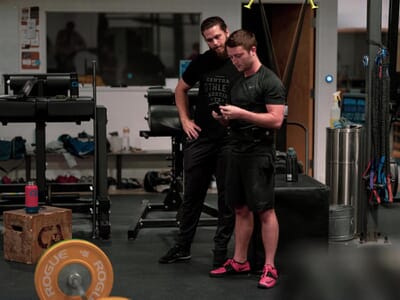