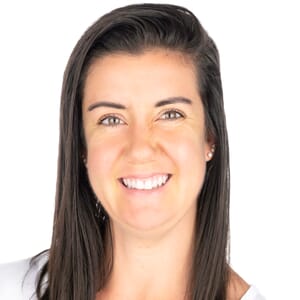 Shayna's fitness journey began in 2013 after she graduated college with a degree in strategic communications. She started running with her dad in order to complete a local 5K in her hometown of Middletown, New York, and fell in love with the sport. One 5K led to another, which led to a 4-mile race, 10K, half-marathon and then another two half-marathons in quick succession. Shayna became enamored with the feeling of setting a goal and achieving it, but was also a little burned out from all of the training and back-to-back racing.

In the summer of 2014, she joined a local gym and hired a personal trainer with the goal of learning more about strength training to support her running goals. It didn't take long for them to realize Shayna was drawn to barbell strength work and CrossFit-style training. As she progressed with her trainer and eventually moved into CrossFit classes, she began to feel the itch for running again and signed up for her first marathon.

About halfway through training in early 2015, Shayna discovered she'd been accepted into the New York City Marathon that fall. She also decided she'd be leaving her job as a campus programs manager at a small startup in New York to move to Austin, Texas, for a new adventure. Things moved pretty quickly after that: first marathon in June, wrapping things up in July, and hitting the road with a car full of stuff in August.

When Shayna arrived in Austin, the first thing she did after unpacking was join CrossFit Central downtown so she could make friends and complement her marathon training. When she mentioned to her coach that she was struggling with getting into the groove of training in Texas (in August no less), he introduced her to Jesse O'Brien of Central Athlete. Jesse and Shayna worked together to get her marathon-ready, knowing that running would be taking a back seat to CrossFit after New York City. After the marathon, Shayna started as a client with Central Athlete.

A lot has happened since then, but one thing has remained the same: Shayna's passion for health and wellness. After 3+ years of working in the nonprofit startup space in Austin, she joined Central Athlete as the chief operating officer, aka the boss. Her expertise lies in bringing order and efficiency to the chaos of a growing company in order to scale its impact. Shayna is driven by a desire to continuously progress in all aspects of her life and to help others do the same.