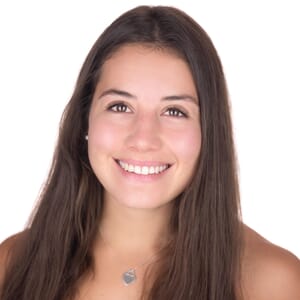 Mariana Martinez was born and raised in Mexico City. As a middle child, full of mischief, she often got into trouble. In an attempt to focus her energy on something more positive, her parents introduced her to many sports at an early age such as gymnastics, swimming, TaeKwonDo, and soccer.

At 16 years old, Mariana began struggling with her body image and was later diagnosed with anorexia and body dysmorphia. She was determined to get healthier and that’s when she discovered CrossFit. At first, CrossFit was a platform for staying “healthy” without gaining weight. But soon the adrenaline and continual improvement became addicting, influencing her to shift her mindset regarding food. A few months later, she was offered a position to coach at a local CrossFit gym and began immersing herself in fitness and helping others live a healthier lifestyle. As the years went by, Mariana developed a passion for coaching and helping others in their fitness journey.

In 2018 Mariana decided to move to Austin and pursue her bachelor’s degree in Global Studies at St. Edward’s University. After three months, she realized she was not interested in pursuing a corporate career but rather one in which she could work with individuals and support them in improving their lives. Mariana switched her degree to Kinesiology and started training competitively in CrossFit. This is when she found Central Athlete, a unique gym that would soon become her home away from home. It was her first encounter with personalized fitness, though initially, she worked out on her own at their brick and mortar location, under the tutelage of an outside CrossFit coach.

For the next two years, Mariana followed a generic competitive CrossFit program that prepared her to compete in local competitions. In 2019, she competed in The Fittest Experience, where she placed within the top 20 intermediate females. However, during her training, she suffered two shoulder injuries. Then, in February 2020, Mariana competed at Wodapalooza, one of the largest arenas of CrossFit competitions, and injured her lower back during her preparation. Throughout this period, her generic training program never addressed her injuries. It wasn’t until after her competition that she realized a “one-size-fits-all” program would neither take her where she wanted to go nor prevent her body from breaking down. Mariana then hired a coach who specialized in personalized fitness in 2020 to help create a balanced lifestyle and ideally, to inspire her to fall in love with the sport again. Mariana immediately rediscovered her passion for fitness—and an eagerness to help people in their fitness journey by utilizing an individualized approach to move them towards a more fulfilling life.

After experiencing what personalized fitness could do for her, Mariana decided to pursue her Opex CCP certification. As her last semester of college approached, she started looking into fitness entities where she could help people beyond group fitness classes or generic training programs. In the summer of 2021, she was offered an intern position at Central Athlete under senior coach Steven Fritsch. Mariana’s passion for coaching grew day by day. She found that she truly valued the personal connections she was building with each client. Learning how to approach each client as an individual made the experience both challenging and rewarding.

After three years of witnessing the work of the Central Athlete coaches and her own experience with personalized fitness, Mariana’s values continued to shift for the better. She is excited to join the amazing team of Central Athlete in order to help people improve their lifestyles and build healthier relationships with their own bodies.

Start your journey with Mariana Martinez