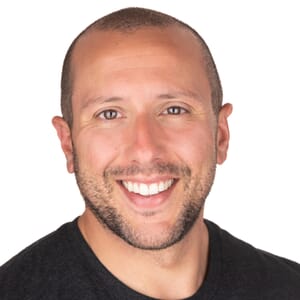 Chris is from Stonington, Connecticut, where he has lived since the age of 12 after moving from New Jersey. His interest in fitness began similarly to many teenagers’, with a Wal-Mart weight set in his basement. In high school, he was a varsity member of the crew, track, and football teams.

During college, seeking an athletic outlet, Chris discovered mixed martial arts. Training in a dingy gym that fighters dream of, he competed in amateur and pro-MMA fights at the ripe age of 20.

At 21 years old, Chris became a police officer in a large suburban town. As a full-time officer, Chris was a community policing officer and field training officer, teaching recruits how to do the job.

In 2011 Chris found his first CrossFit gym and began immersing himself into fitness, not just for himself but for others. After his CrossFit gym suddenly closed, he took to training in his garage, and with a peaked interest in fitness began seeking education.

As the years went by, Chris made drastic changes with the main quest of reaching as many people as possible in the best way possible. In 2015 he opened his own CrossFit gym and shortly after left full-time police work. Chris was passionate and “all in” on helping people improve their health and fitness.

Chris began to learn that people had very specific needs and goals that were difficult to navigate in a group setting, and he realized his approach had to change. In 2018 he became an OPEX CCP coach. This process led him to better understand what he already knew: to appreciate the individual. Chris found that he truly loved the bond that he developed with his clients. To truly know people to the point that they trust you with intimate details of their lives because they believe in you is an incredible feeling.

Chris found that his true passion was in coaching rather than running a business. He found a strong connection with the path and mission of Central Athlete and pursued taking his talents and experience to this extraordinary team. He fully appreciates the value of a coach and has had his own individual coach since 2018.

Chris loves changing people's perspectives and relationships with their health and fitness. Working with people who are committed to expanding the boundaries and quality of their lives by focusing on themselves drives him. Chris has worked with hundreds of people to ignite their passion for life, improve their confidence, and mend injuries. He loves seeing his clients become capable of things they never thought possible and see the benefits of it outside of the gym.

Chris has been married to his wife Mary for eight years, and they’ve been together for 14. They have a 2-year-old son, Colin, and two dogs, Maggie and Ace. Outside of his own training, Chris lives for summer, where he spends most of his spare time at the beach or on his boat. Chris is still a part-time police officer in a small beachfront community.

Start your journey with Chris Banks