It is safe to say that the stronger the posterior chain (the muscles along the backside of your body, such as the spinal erectors, glutes, and hamstrings) the stronger the individual. There are body compositional benefits that come with having a well developed posterior chain as well. Whether your goals are increasing strength and supporting performance, or prepping for swimsuit season, you won’t want to miss this information!

There are more efficient ways to develop your posterior chain than the conventional deadlift, and understanding where you sit on the fitness continuum will be crucial when deciding which posterior chain exercises will work best for you.

Below we have included 10 variations of posterior chain exercises, from non-traditional main lifts to accessory work that can be used for both beginners and advanced athletes. Each exercise can be used to develop a stronger posterior chain to increase resiliency and absolute strength while also increasing the muscle mass along your backside.

The barbell hip thrust is a movement that utilizes more muscular activity in the posterior chain than most other movements. Brett Contreras, also known as “the Glute Guy”, studied hundreds of different hip extension patterns using electromyography, which measures and records muscular activation, and in these cases, looked specifically at the glute, quad, hamstring and adductor activity of each particular exercise. The barbell hip thrust is one of the top exercises that activates 119% more of the glute muscles compared to your tradition squat and deadlift. Once the proper hip flexor flexibility is established, which allows you to open up the hips and maximally contract the glutes, it is time to move into more challenging exercises, such as the barbell hip thrust. I recommend doing 2 sets of 10-20 reps. It is important to ensure that the hyperextension comes from the hips, NOT the lumbar spine to ensure maximal glute activation and that you are driving through your heels while keeping the toes off the floor during this exercise.

The reverse hyper is another hip hyperextension exercise that activates even more muscles of the posterior chain than even the barbell hip thrust at 122% glute activation.

This machine and specific exercise were invented by Louie Simmons of Westside Barbell while he was recovering from a broken vertebra. He developed the reverse hyper to strengthen the muscles of the posterior chain and glutes. Weakness in these areas is a major cause of back pain for many individuals. The reverse hyper builds hamstring and hip flexor flexibility, anti-flexion core stability, and glute strength.

Never used a reverse hyper machine? Unfortunately, this piece of equipment is rarely seen in your typical gym and because it takes up a lot of space, even most functional fitness studios won't have a reverse hyper included in their equipment repertoire. Feel free to stop by Central Athlete to give it a try and learn more about how we implement this machine for other posterior chain exercises such as the pendulum quadruped hip extension or straddle glute hold.

The kneeling squat is another one of my favorite posterior chain exercises because you can significantly increase the load relative to traditional hinging and squatting patterns. Additionally, the kneeling squat activates more muscles of the glutes than the conventional deadlift, sumo deadlift, and Zercher squat. This movement is underused in my opinion, and is not only great for lighting up your backside but can be used with lighter loads to help pattern hip flexion and extension. The heavier loads that are necessary to break down muscle tissue also allow individuals to feel confident under heavy loads. We find that this potentiates the nervous system and is also a great tool for strength development. Often times an individual can build up to lifting two times their one rep max back squat for multiple reps, which is powerful as a strength development tool.

How does this movement work?

Place the barbell in a low bar position on your back and assume a tall kneeling position on a mat. Push your hips back and down until you are sitting on top of your heels. From here, extend your hips forward into full hip extension, repeating for 8-12 times for 3-5 sets. If your core is strong enough, you can go extremely heavy, so don’t be shy.

I recommend an eight to twelve-week build, while progressively overloading with intensity each week to get the body comfortable with extreme loads. The first time I had kneeling squats in my program was in 2017 and I built to 160 pounds for a 10 rep max. Then over the next 12 weeks through proper overloading, I was able to complete 3 sets of 10 at 275lbs at 120lbs bodyweight.

The box squat allows individuals to use a wider stance compared to the conventional squat. This utilizes more musculature of the hips, glutes, and hamstrings. This exercise can be magical for teaching proper muscular recruitment of the posterior chain and is great for individuals who favor knee flexion and are quad dominant.

The box squat should be initiated by pulling the hips back throughout the duration of the squat. Once the athlete is on the box, their knees should be directly over or behind the ankles to ensure the hamstrings have sufficient muscular tension. After sitting on top of the box, the athlete will disconnect their hip flexors and explodes upwards to a standing position, again ensuring that the knees do not shift forward during the concentric portion of the movement.

This specific posterior chain exercise is also great for speed and power development and should be used with submaximal weights to ensure proper mechanics and speed out of the bottom of the squat.

The forward sled drag is a single leg posterior chain exercise that can be used to build work capacity, injury resistance, and hypertrophy. The great thing about this exercise is that there are no eccentric loading patterns, which decreases soreness and injury risk. This movement can be done at relatively lighter loads for longer distances (100 to 300 meters) or heavier loads for shorter distances (10 to 50 meters), but regardless of the load and distance, your hamstrings and glutes will feel the burn. This exercise is great because it can be used for both the beginner and advanced athlete and since it involves primarily the concentric phase of a movement (shortening of the muscles) it won’t tax the nervous system or result in extreme soreness the following day, no matter how tough the workload feels. Now that’s a win!

The Romanian deadlift (RDL) is one of my personal favorite posterior chain exercises and can also be used as either the main lift or an accessory component to a training program. This particular exercise works your glutes and hamstrings even more than the traditional deadlift by maintaining a soft knee which eliminates the quads ability to contribute. Just like the box squat, you can also use a wider stance variation to enhance the muscular activation of the posterior chain and is even preferred for those who have a limited range of motion. Before advancing to a barbell or dumbbell variation of the Romanian deadlift, it is important to ensure that the individual has proper hinging patterns. If the RDL is being used as the main lift, 3 sets of 3-12 reps are recommended whereas 3-5 sets of 8-15 reps would be recommended for hypertrophy or accessory work.

The GHD hip extension is a posterior chain exercise performed in a glute ham developer (GHD) machine where the hip acts as a hinge allowing the posterior chain to lower the torso with a neutral spine. This movement is great for both beginners with proper hinging mechanics or advanced athletes and can be made more challenging by increasing time under tension or adding external loads by using weights or bands. To ensure the glutes and hamstrings are getting the majority of love in this specific movement, it is important to be extremely intentional about not hyperextending your lumbar spine at the top of the rep to achieve a false sense of range of motion. Instead, rely on the glutes to pull the torso while keeping the ribs tucked and spine neutral. Do it correctly, and these will get real spicy, real quick! These are best done as an accessory movement with a dose-response between 5-30 reps x 2-5 sets depending on the client.

The glute ham raise is another exercise performed on the GHD machine that is a potent posterior chain exercise. Because this movement can be extremely difficult, another exercise that will be useful for not only developing the glute ham raise, but maximizing the muscles of the posterior chain is the glute ham raise negative where you only complete the eccentric portion of the movement in a very slow and controlled fashion. Similar to the GHD hip extension, it is important to ensure that your lumbar spine stays neutral and even more important to ensure your hips stay extended throughout the entire movement to get the maximum activation of the glutes and hamstrings. To make this movement more difficult, you can add load, increasing time under tension, or use a resistance band will surely crush your backside, in a good way of course. You can also augment your hand position. Hands behind you is the easiest, arms crossed across your chest to a bit harder. Interlock lock your fingers behind your head if you want a tough variation and if you are a savage you will point your arms overhead in a “Y” position. Be sure you or your client is able to do 3-4 sets with 8-12 reps before advancing into more difficult variations.

All of the movements we have discussed thus far have been dynamic movements that involve both the flexion and extensor muscles of the hips. The Sorenson is different because it is an isometric exercise that improves postural endurance by activating solely the hip extensor muscles as well as every other muscle of the backside from your calves to your spinal erectors. Ideally, this movement should be done non-weighted first but once the individual has accumulated adequate volume, I find that weighted Sorenson holds can be one of the most physically and mentally tough exercises for the posterior chain when done correctly.

Although this particular movement only involves 52% muscular activation of the glutes, it is a great tool for building strength in the hamstrings, spinal erectors, and lats. The wider stance used in a sumo deadlift compared to a conventional deadlift allows for more adductor and hamstring utilization and is easier for most everyone to get into a better position for maximal muscle recruitment. This movement can be made even more difficult by adding a deficit, resistance bands, or by increasing time under tension and pausing between each rep before pulling off the ground. Try 2-5 sets between 5-20 reps to be great not only for hypertrophy but for strength purposes as well.

Designing a training program that ensures long term progress with adequate phases of volume, intensity, and deloads can be a daunting task. If you are looking for more guidance in your training to ensure your hard work both inside and outside the gym leads to the results you want, click the link below to speak to a Central Athlete coach today! We take the guesswork out of training, nutrition and more so you can put your energy where it matters! 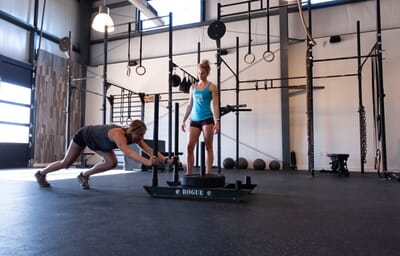